"What is the origin of the " legendary sake"? Approach the history and its attractiveness of the super famous sake "Koshi no Kanbai"!

Among various sake, the most famous brand is "Koshi no Kanbai"

Perhaps, if you are a sake lover, you may have heard it.
From the young generation it may be an image of sake with a long history.

This Koshi no Kanbai is used to be called "legendary sake" and Jizake (local sake) became trend thanks to this sake. It is indispensable in the history of sake in recent years.

This time we'll show you history and charming points of Koshi no Kanbai.

What kind of sake Koshi no kanbai is ? 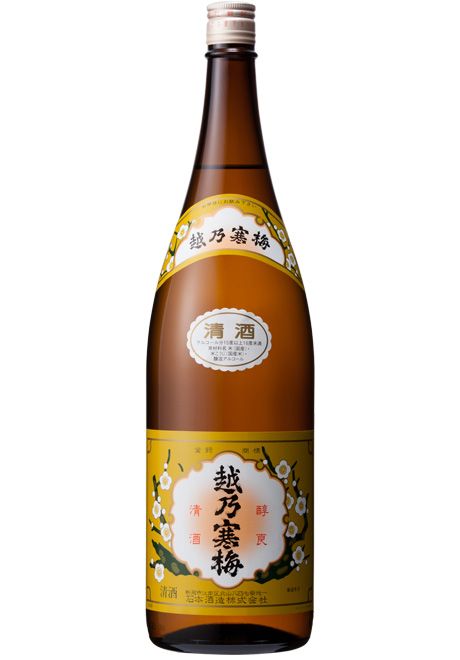 
A synonym for "light and dry"

What kind of taste is it? In short, light in aroma and flavor. It's sharp and smooth so that you can drink it as if you drink water.

In the 1970s, Koshi no Kanbai became popular.

Actually, before this time when during the postwar era, sweet sake was popular so that sales were sluggish. Even so they still continued to brew dry and light sake. Then Koshi no Kanbai became popular.

Next, we'll tell you about history of Koshi no Kanbai.

jizake became trendy
The fact that Koshi no Kanbai is said to be a legendary sake. It related "jizake" became trendy in the '70's. Until then, the popular sake was a nationwide brand from large brewer in Nada and Fushimi.

In the 1970, Japanese National Railways was carried out a campaign named "Discover Japan" aiming at the increase of individual travelers. By this the local area was getting popular and
local sake (jizake) was also in the limelight.

That is what we call "jizake boom". The local sake such as Koshi no Kanbai from Niigata, Urakasumi from Miyagi and Umenishiki from Ehime were getting popular instead of major national brands.

By the way, who named "legendary sake" for Koshi no Kanbai and jizake got trend was Hisako Sasaki. She was a chief editor of the magazine "sake". In 1963, it was mentioned that how she loved this sake on "Weekly Asahi" magazine and it became a reputation.

Because of that Koshi no Kanbai got difficult to buy due to its popularity and the price rose a lot. Recently the price returned to normal levels. So watch out if you see too expensive price.

Hometown of Koshi no Kanbai
Koshi no Kanbai is made in Kamedago which is located in the heart of Niigata. Abundant in pure and soft water from Agano River, low temperature environment blessed with snow in winter. It is an area suitable for sake brewing.

This area is also famous for beautiful plums named "Tōgorō ume "that appear during early spring despite being still low temperatures. This Plum blossom that stood out so vividly became the origin for the name of sake, Koshi no Kanbai.

Koshi no Kanbai is brewed in a beautiful village where suited for sake brewing. You can imagine a beautiful river, snowy landscape in winter, pretty plum blossoms blooming in early spring of Kamedago from this delicious sake.


In 1970, Ishimoto sake brewer established to making sake that encouraged the local farmers of Kameda. The brewer is getting popular day by day and it attracted attention at various fairs.

Unfortunately, after that period, it became impossible to brew sake under the influence of war.
After the war it became difficult to get enough rice. The hard period continued.

In spite of this situation, they polished the rice white and did their best to "brew sake small amount but make someone happy."

Soon it became a period of high economic growth and the sake was mass produced. Though people prefer sweet taste of sake to drink, Ishimoto sake brewer continued to brew "light and dry sake" amount suitable for the scale of the brewery even they could sell as much as they like.

After that period, jizake got trendy just like we mentioned above. Koshi no Kanbai became
the most famous and popular jizake. Even so they still continue to make the amount of sake in such way to keep good quality.

That attitude has not changed to the present. Ishimoto sake brewer is steadily progressing step by step to make delicious sake.

Sake brewing with good rice. people and technology
Ishimoto sake brewer offers a smooth sake and you can feel the true essence of rice in it.

They polished rice and carefully brew with gratitude to the place of producing area and enthusiasm "absolutely make a delicious sake". To mature until the taste of rice is drawn out to the maximum extent so that Koshi no Kanbai will be completed.

By Ishimoto sake brewer, it's also important harmony of the "people". They eat together lunch and share the passion and taste. The person who works for sake such as craftsmen, person in charge of bottling or shipping, administrative staff, salesperson, exclusive gardener, cook. Each person related to sake brewing makes one's mind together so that Koshi no Kanbai is completed under the "wa (harmony)".

Besides the technology of Ishimoto sake brewer can be described "Bold, and meticulous, thoughtful". The best ingredients, the wonderful atmosphere of the place and the maker do their best. Ishimoto sake brewer do the most of their skills and brew sake of consistently high quality.

Though Koshi no Kanbai is a famous brand from a long time ago it still getting to evolving.
We'll show you from standard sake till a "new" Koshi no Kanbai. 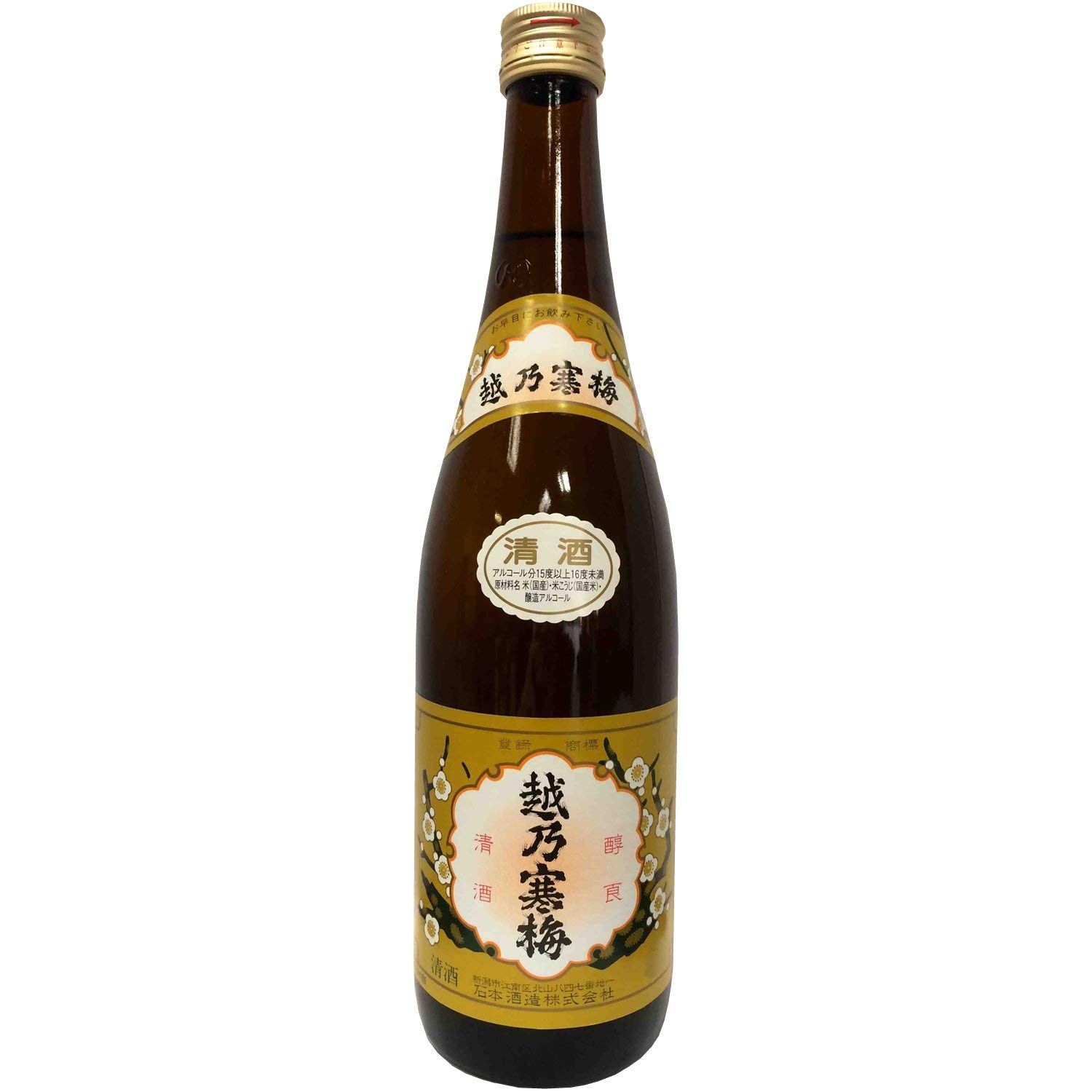 The most familiar and satisfying sake is here. Though it's an ordinary sake, which was thoroughly fermented for a long time at low temperature and thoroughly charged with basic technology of ginjo (premium sake).

This sake is well suited as an evening drink. Timeless, sake that will not give you easily a hangover. Quite crispy sake. 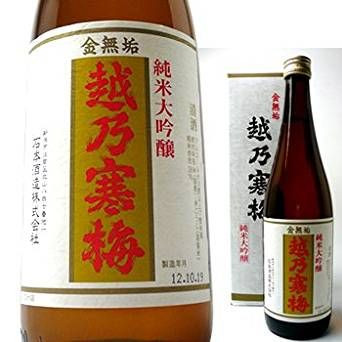 Junmai daiginjo that made with 35 percent polished rice of Yamada-nishiki. Light fruity flavor and a delicate taste.

You can feel the most " typical Yamada-nishiki" that the taste improves as ripening proceeds.
It is a fully well-aged sake at low temperatures so that when you drink it warmed, you can enjoy more fragrance and taste. 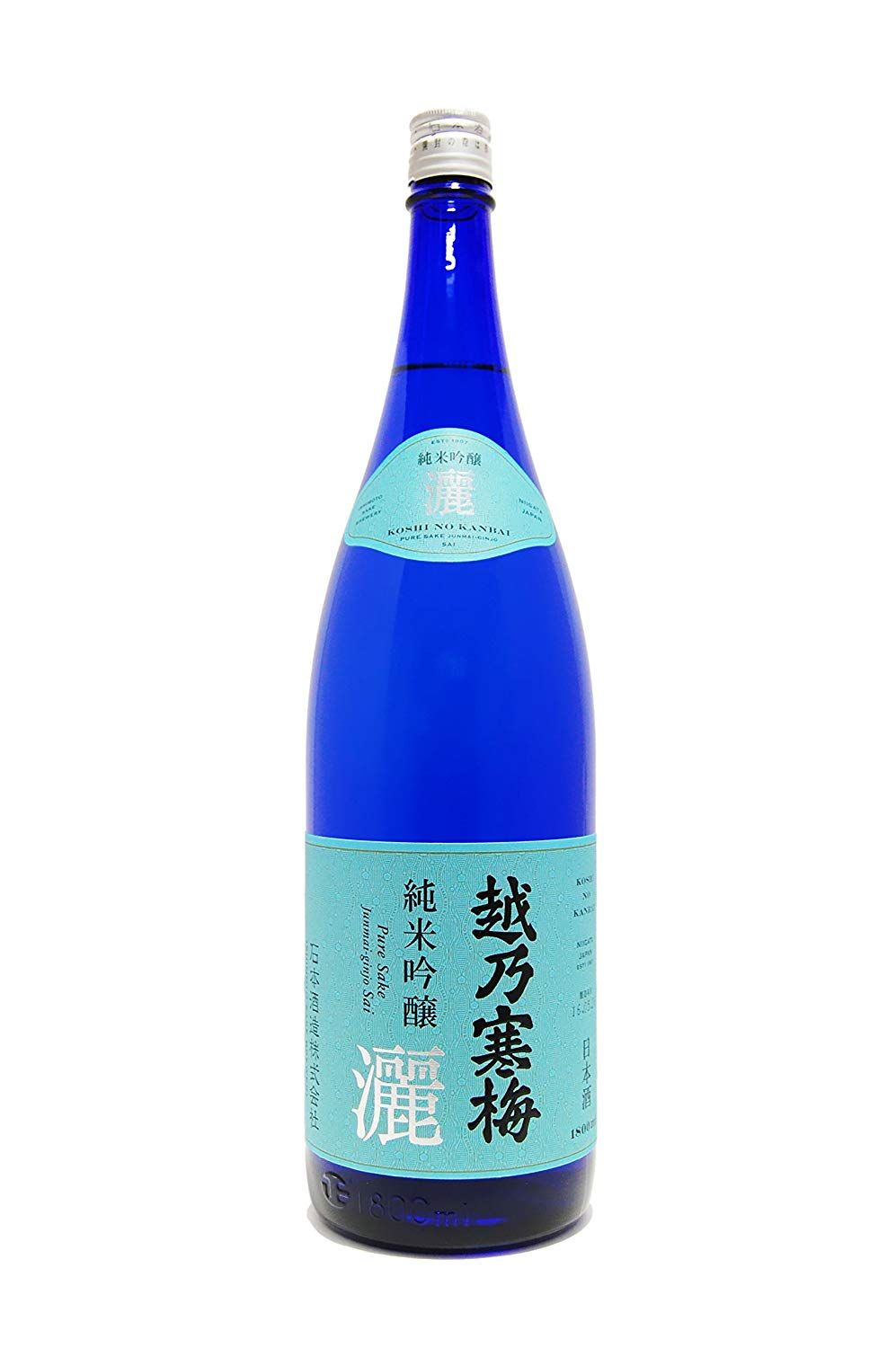 Here is the new product for the first time in 45 years of Ishimoto sake brewer.
This sake with a crystal-clear impression is a junmai- shu which you can taste of delicious rice,
Even so it's light and smooth sake that you don't get bored of its taste.

The perfect temperature is around 10 degrees celsius. This sake is also for starting sake drinkers. You can try it as a first experience of Koshi no Kanbai.

Junmai daiginjo of Koshi no Kanbai that made with 48 percent polished rice of Yamada-nishiki.

The characteristic points are rich taste and you can find the original flavor of rice. The smoothness and fragrance of sake is also wonderful. The perfect sake drink slowly and enjoy the taste and flavor.

Ginjo- shu with light fruity fragrance and smoothness. It has a delicious elegant aftertaste with a good balance between acidity and sweetness.

Now do you understand a little bit about the reason why it called legendary sake and the history of this sake?

Of course it's delicious to drink trendy sake however it's also nice to drink a traditional famous brand sake while thinking about the history of sake.

The amount of sake that you feel delicious is increasing and you will love sake more!

"What is the origin of the" legendary sake" ? Approach the history and its attractiveness of the super famous sake "Koshi no Kanbai" !

The basic knowledge of Awamori〜No.1〜 "If you know, you can drink more deliciously!