You will be tempted to keep them! 6 Shochu with cute labels! (w/Photos)

When you see some cute liquor bottles, don’t you feel like you want to grab them and look at them? Actually, there are shochu bottles, which even after you’ve finished drinking, you would want to keep for a decoration on your shelves. So, check out these 6 cute labels that you will be healed just by looking at them.

Osuzuyama distillery at Koyu-gun in Miyazaki Prefecture. Keeping the idea of "the era after the mass production and consumption" in mind, the company develops products that are safe with extensive care, maybe in a smaller amount but in an environment where they coexist with nature. This is “Yamaneko,” an imo shochu made at Osuzuyama distillery. It looks very unique and interesting. The design of the label is made by Ikutomo Kuroki a printmaker living near the distillery. Rather than a label of shochu, its lovely design gives you an impression of a picture book cover.

“Koisuru Shochu” is a seasonal limited shochu made using sweet potatoes. The series that are released nationwide, contains 6 shochu produced by Shochu companies from Kagoshima prefecture. Beniimo, a type of red sweet potatoes mainly used in confectionery is brewed as a raw material, offering a sweet, well-rounded flavor with rich aroma. The types of sweet potatoes used are "Beni Haruka," "Hama Komachi," " Ei Murasaki Potato," "Ayamurasaki" and "Murasakimasari." All six shochu have an alcohol content of 12 percent, which is about a half of what is used in regular imo shochu. The label is designed by Junichi Koka, an illustrator living in Kagoshima, which its cute design will make you want to use it to decorate the room, when you finish drinking.

A shochu has a taste and aroma that stand out. By cutting the alcohol and koji odor, it was made in pursue of a clean umami. As a result, a delicious and highly fragrant honkaku mugi shochu (barley shochu) was brought to life. The name “Sasa” means alcohol and “Iwata” means lightning. Enjoy the new mugi shochu with an exceptional taste. The label’s design is of golden wheat grown in clean water and a frog. It illustrates a frog surprised by thunder jumping out in a wheat field and is glittering in a golden color. Such a scene is brought to life in this label.

The slim and stylish designed bottle would make you wonder if it’s a wine, but this is an imo shochu. A sweet Annouimo, which is usually used to make a confectionery and a slowly baked sweet potato are used as raw materials, offering a sweet and well-rounded flavored shochu. It might attract attention if you take to a girl’s party.

Ice na osaka (only in winter) 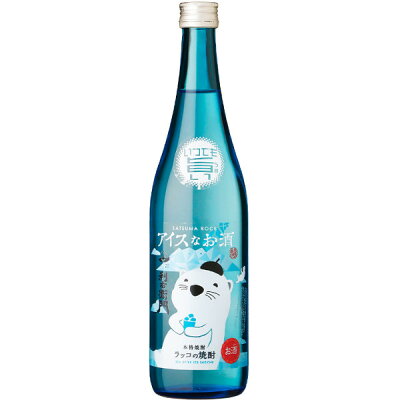 This was produced by Minamikyushu Shuhan in collaboration with 7 major breweries in Kagoshima Prefecture. They created their own original blends of sweet potato so that it can be cooled in a refrigerator and drink it straight.
"The crustal movement caused Kagoshima to move to the North Pole!? The animals raised in the North Pole enjoy shochu on the rocks in summer, using the ice from Sakurajima, which had become an iceberg." This is the story behind the package design, which shows animals living in the North Pole. You will want to collect all kinds of these cute and cool looking bottles.

Natsu no mannen (only in summer)

Three brewers from Miyazaki Prefecture gathered to make the "summer shochu series." One of them is "Natsu no Mannen" from Watanabe Sake Brewery. A die cut penguin motif is added into a summer-like sky blue bottle. It has a very impressive design. The self-cultivated Satsuma imo "Dai chino Yume" is used as the raw material. It also uses rice koji from “Natsu no Emi,” (black koji) a new variety of rice produced in Miyazaki Prefecture. Enjoy its refreshing sweet aroma and cool looking bottle perfect for summer.

“Natsu no akakage” is a refreshing mugi shochu made by Yanagida Shuzo, the brewer in Miyazaki Prefecture. It is sold only in summertime as "Summer Shochu Series" together with "Natsu no Mannen" introduced earlier. The beautiful sky blue bottle that makes you think of a blue sky in the summer has a label designed by a young graphic designer from Miyakonojo City, where Yanagida Shuzo is located. Due to the cool cute design, it does not look like a shochu bottle.

What did you think of these cute labeled shochu? We have picked out the cute ones that will make you smile, as well as the ones with beautiful designs. We think they would be suitable to bring to one of your girl’s parties.

Do you know the actual reason of turning red after drinking alcohol?(w/Photos)

Why do you become sleepy when you drink alcoholic beverage? I’ll explain you about the relationship between alcohol and sleep.