At this point it is practically infamous that Japan has a declining birth rate issue, but a new tally by the Ministry of Health, Labor and Welfare of Japan revealed that the number of marriages is also on the decline for its fifth straight year in a row. It's no secret that the marriage rate and birth rate are tied to each other. Especially in Japan, if you get married legally and are raising a child in the country then you are entitled to some perks given by the government in the form of either monthly stipends or other incentives. However even with that government assistance the declining marriage statistics continue to go on a downward trend.

In this article we take look at the new interesting and different ways Japan is trying find their significant other and tie the knot.

In recent years there is a new trend popping up in Japan where men go to drink and meet the ladies. They pay an entrance fee and get to meet girls. It sounds sketchy but it's actually becoming a common occurance here in Tokyo. These shops are called Aiseki which means sit and meet your love and are usually referred to as group dating. So if you're in a group of 3 guys, the staff will match you up with 3 girls. After a certain amount of time, the chairs rotate and you can get to meet other girls that you haven't met yet. It's one of the ways men in Japan go to meet girls and when you're in a group sometimes it's easier to find that special someone who you can connect with.

Girls can enter for free if the shop lets them in. Girls that are in the shop are treated to a luxury of free food and drinks. All they have to do is talk to the customers, which are the guys. Guys have to pay a flat fee per hour which can range between 1500 - 6000 yen approx. $15 - $60 USD. It sounds expensive just to meet girls right? Well guys also get a free all you can drink option with the plan. So both sides can enjoy getting drunk and get to know each other. Travelers can also enter, although it may be difficult to hold a conversation if you can't speak Japanese. More information can be found on the shops website, don't worry it's completely professional and friendly. Oh and they also have an app where you can see the ratio of guys to guys at each shop, so you can feel at ease knowing that there are people to meet at the shop you are headed to.

In a society where the working hours are more than usual causing people to not have much time on their hands, you would think that Tinder is the most popular app in Japan. However it is not as there are other apps created in Japan that are more user friendly and convenient to its base. Take for example "pairs", which saw a significant boost in users in recent years and has quickly become one of the go to apps in Japan for finding a marriage partner. This made in Japan app is not completely free...for guys... you get a limited amount of likes per month and in order to message a person, you will have to pay for one of their monthly plans and become a paid member. For girls however, the app is completely free. If your noticing a pattern here about dating culture in Japan then your right, it is the gentlemen approach. Men pay for everything.

Pairs like other Japanese dating apps in Japan contribute to solving Japan's declining marriage rate. As dating apps here generally are for those seeking not just a one time fling, but a serious marriage partner.

Straight up Nampa (Picking up Girls) 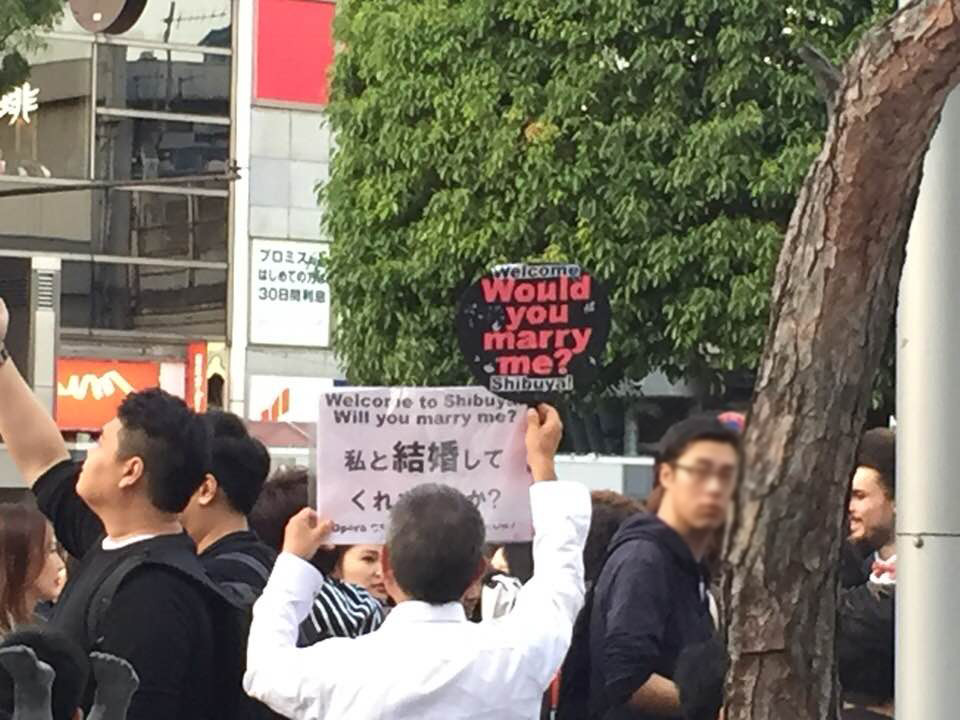 The street approach which is referred to as Nampa in Japan is the act of picking up girls. In Tokyo there are many places where you can go try and sweet talk to a girl and get her number such as yokochos(food alleys), Ginza, Shibuya, and many more places. In some places the staffs at the shops will purposely seat you next to a group of guys or girls to allow you to potentially have a chance to communicate. Usually you see street nampa often at night or during a nightlife bar hopping event but this one man's approach takes it to whole new level. He takes it to the bustling streets of Shibuya where thousands of people cross everyday. What better way to capitalize on being single than to hold a sign and ask for marriage? Needless to say this man has succeeded in getting girls attention. I was there... clap clap clap

These are just some of the interesting ways Japan is trying to improve its marriage rate. All 3 ways mentioned above have found plenty of success in matching couples and increasing the marriage rate in Japan. Stories of a successful marriage have reached many different media outlets and continue to promote the society to go out, have a date, get married, and have kids. Can Japan turn it's marriage rate around? Only time will tell.

Izakaya Koji | Let’s go to Hoppy Street when you enjoy drinking and eating in Asakusa. (w/Photos)